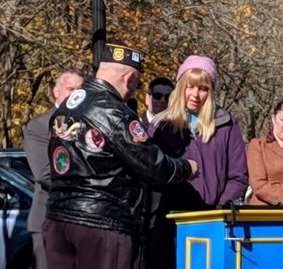 During the annual Veteran’s Day ceremony on November 10, 2018, Councilwoman Lynn Hughes was presented an American Legion Centennial Medallion by James Conroy, a Borough resident and member of the American Legion.

“Lynn Hughes is a dedicated teacher and public official who has served the people of High Bridge for many years. She epitomizes all that is good about our community and our country. We felt it was very appropriate to recognize her in this manner during the American Legion’s centennial celebration,” said Mr. Conroy.

The American Legion is chartered by Congress as a patriotic veterans’ organization focused on service to veterans, servicemembers, and communities. The organization evolved from a group of war-weary veterans of World War I into one of the most influential nonprofit groups in the United States.