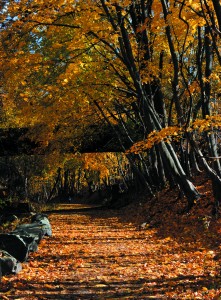 The Columbia Trail strings together forests, farms and parklands as it stretches eleven miles among the small towns of High Bridge, Califon and Long Valley. Most of the corridor parallels the South Branch of the Raritan River. After passenger trains and rail cars laden with iron ore ceased running this line, the Columbia Gas Company constructed a pipeline under the former rail bed. It then transferred the surface rights to the Hunterdon and Morris County Parks Departments.

The Trail starts in High Bridge near the center of town, and parking is available at the Borough Commons parking lot on Main Street. Several lightly traveled side streets intersect the corridor before you encounter woodlands and the banks of the Raritan River, considered one of the State’s premier fly-fishing trout streams. Approximately one-quarter mile from the Commons, the Trail is intersected on the right by the Taylor SteelWorkers Historic Greenway. After about two miles, the Trail enters the magnificent Ken Lockwood Gorge, where steep slopes reveal rapid water and dramatic rock formations. Currently the Trail ends at Schooleys Mountain Road in Long Valley. (Excerpt from: www.traillink.com)

Hiking/biking trails connect to Larrison Road and Cregar Road on the north end and Main Street and The Commons on the south end.

Blue Steel and Green Flash are bike only, downhill only trails. No hikers. No pushing bike uphill.

Do not ride beyond your skill level. Pre-ride. Re-ride. Free-ride.

Please do not ride bike flow trails when muddy! This ruins the trails for everyone. 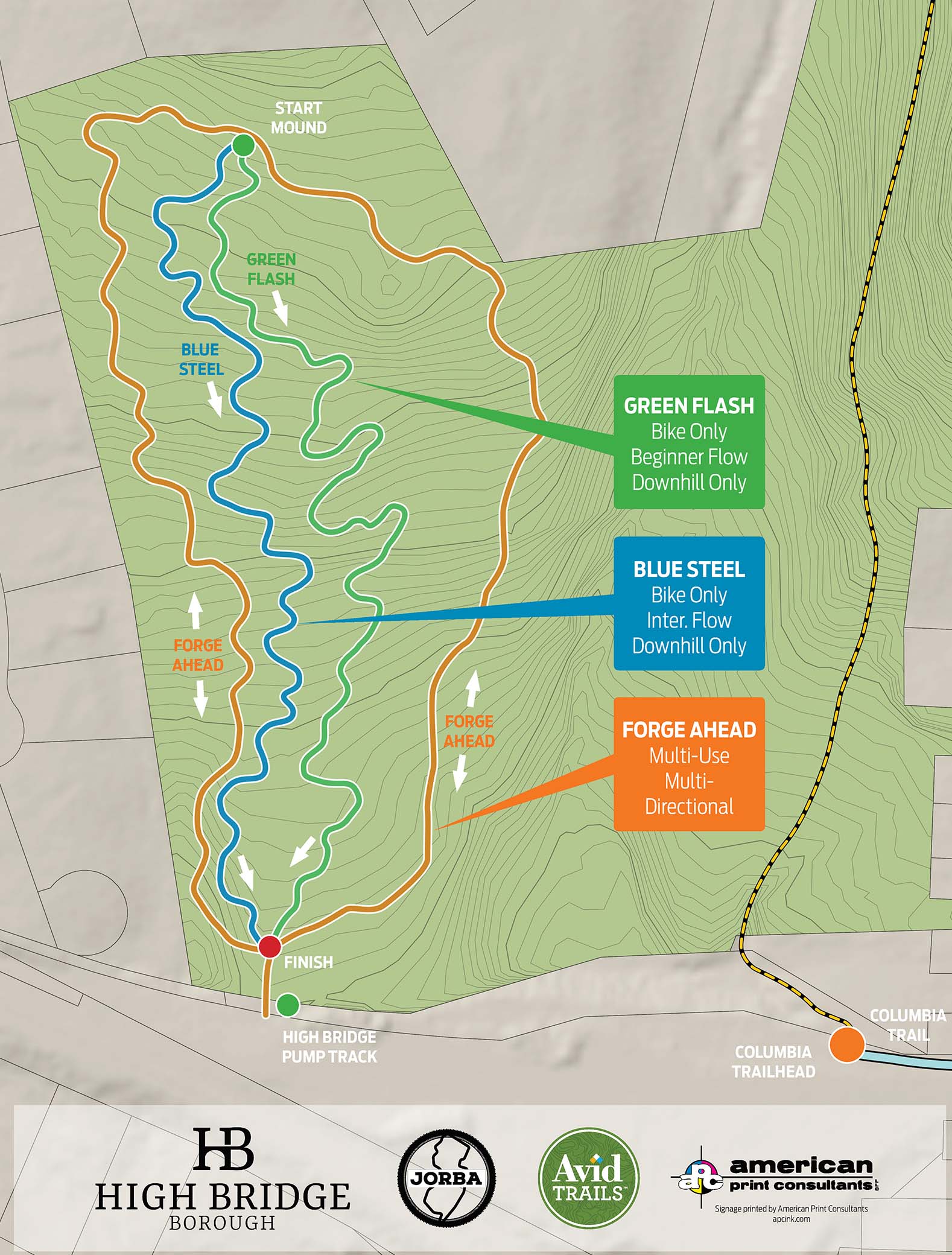 The Nassau Trail System was originally cleared and established as a hiking trail by local Eagle Scout Will Meissner in 2007 as part of his project to attain the rank of Eagle Scout. Located in 52.4 acres of Green Acres property, the Trail covers a four-mile walk through Borough-owned property. Starting in 2011 High Bridge residents Jeff Oliver, Thatcher Simpson and a crew of volunteers have used well-established and eco-friendly techniques to expand the original Trail into a flowing, single-track MTB trail system. The reconfiguration of the Trail opened up previously difficult areas to hikers and bikers. 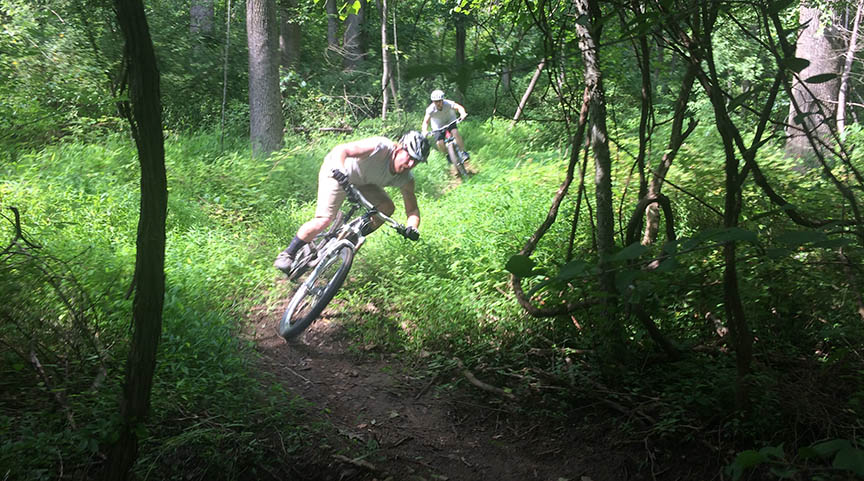 According to an article in the March 2009 New Jersey Monthly, “Dedicated anglers know that New Jersey is home to some of the finest trout waters in the East. And for many, the pick for the best fishing hole in the State would be Ken Lockwood Gorge, a picturesque spot designated by the New Jersey Division of Fish and Wildlife as the trout conservation area.”

The Ken Lockwood Gorge, just north of High Bridge, is one of the State’s most picturesque wildlife management areas and popular among birdwatchers, hikers and photographers. Featured on an L.L.Bean® catalog cover in the 1990’s, it straddles the South Branch of the Raritan River for about 2.5 miles, covering 260 acres. The Raritan River follows the Gorge and is open for trout fishing year-round. The River supports trout, smallmouth bass, rock bass and sunfish. Parking is available in several locations on West Main Street, Arch Street, and River Road. (Excerpt from: www.njmonthly.com/articles/best-of-jersey/on-the-fly.html) 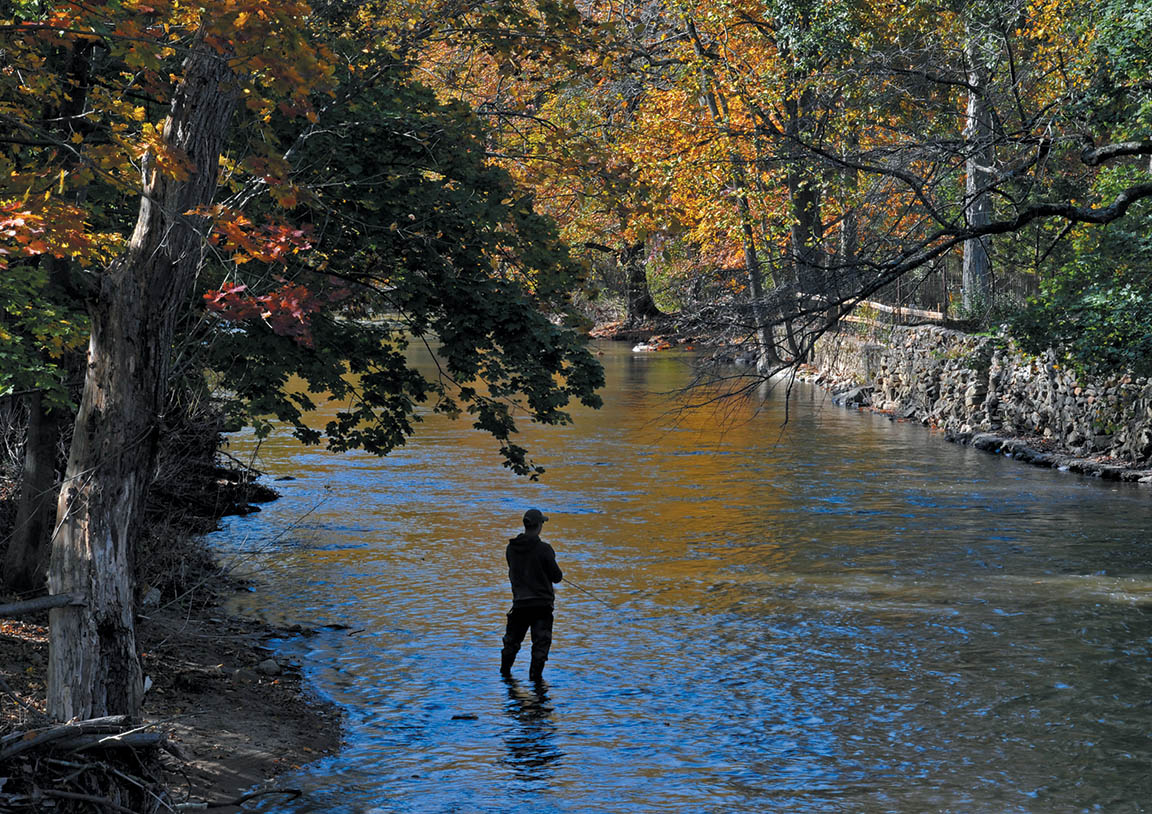 Ken Lockwood Gorge, one of the premier fishing spots in New Jersey, is just north of the Borough of High Bridge. 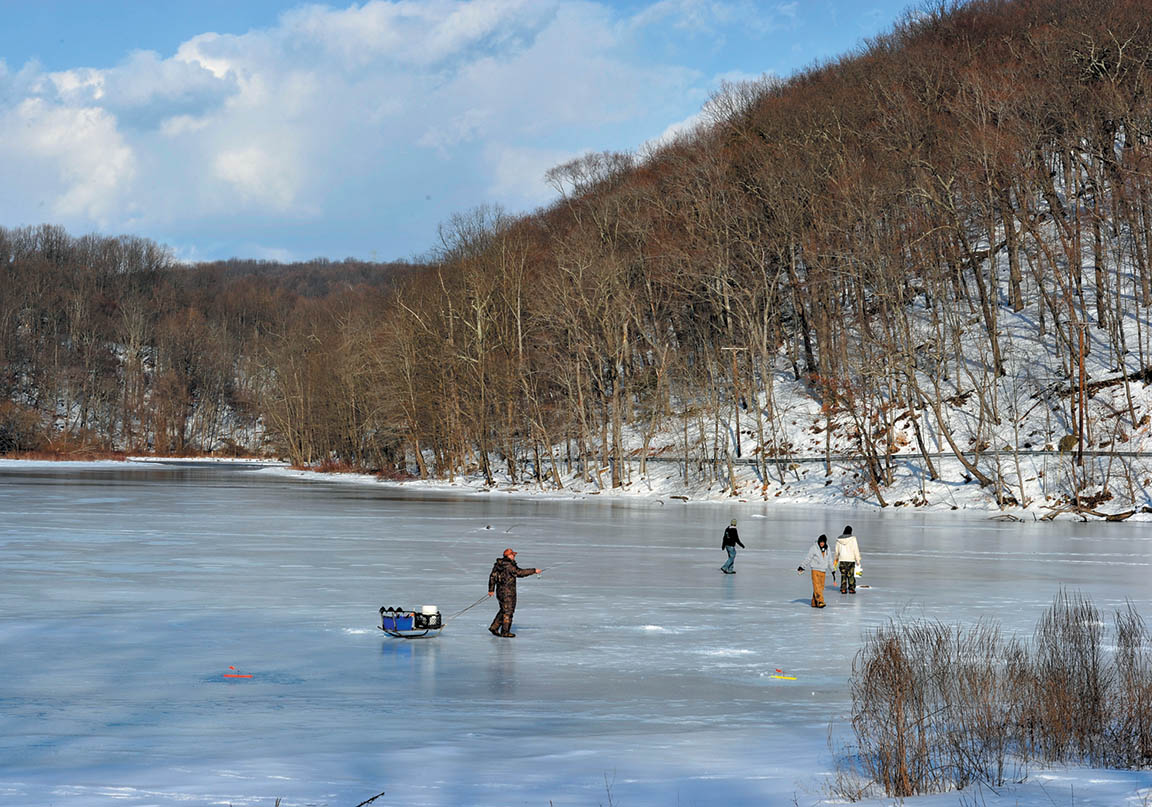 From the time of its construction in 1858, Lake Solitude provided a functional use as a power source for the Foundry as well as a popular recreation area. In 1909 the original crib dam was replaced by the current spillway structure, which is a significant example of dam engineering known as the buttress dam. This is the earliest example of this construction type, and it is the last remaining buttress dam in New Jersey. The dam is recognized by the State and nationally as a significant historic structure.

In 1742, William Allen and Joseph Turner founded an iron company out of a small forge in High Bridge, expanding its size and renaming it Allen and Turner.  The original foundry later became Taylor Iron Works and then Taylor-Wharton Iron and Steel Company.  The landscape around the factory changed quite a bit over the past century. 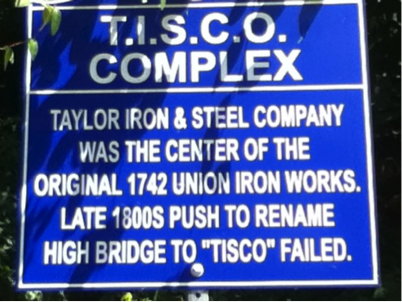 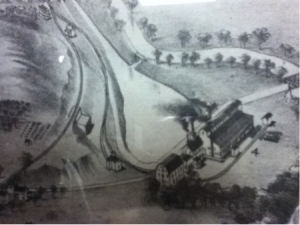 Pond in front of factory from a late 1700s drawing 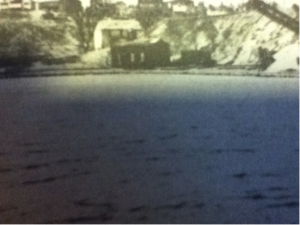 This photo gives an idea of how deep and vast the pond was.

A huge pond for cooling the iron and other metal products used to be located along Washington Avenue in front of the Taylor Wharton facility. At Fourth of July celebrations, employees and their families held swimming and boating races in the Foundry Pond.  During the Depression in the 1930s, WPA labor filled in the pond and it became just a muddy field.

Today, part of the former pond has become a huge area for sports.  Groups such as the High Bridge Middle School’s baseball and softball teams, men’s baseball, and women’s softball play on the fields.  In the fall, the Hunterdon Huskies use this location for their football games.

High Bridge’s first library was located on the edge of the Foundry Pond.

In a small building on the edge of the huge pond, High Bridge opened its first library in 1914. This was the idea of Lucy Taylor, wife of Knox Taylor owner of the Taylor Wharton Foundry. Mary Flowers was the first librarian. During the first year, the library was so popular that 288 patrons used it, and it was able to stock 650 donated books and 124 volumes from the NJ State Library Commission.  In 1938, the library relocated to the top floor of Borough Hall.  High Bridge’s library moved to its present location adjacent to Borough Hall in 1965 and is now part of the Hunterdon County Library System. The first little building on the pond is long gone. 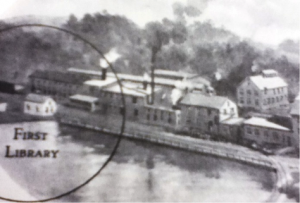 High Bridge’s first library on the edge of the Foundry Pond. 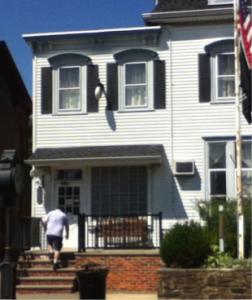 Walking on the path behind the ball fields on the east side of Washington Avenue, visitors will come to two vacant buildings.  Although the edifices are across the river from the main facility, both were once part of Taylor-Wharton Iron and Steel Company.  One is the vast concrete structure Shop E, which was used for steel grinding and as a machine shop.  The railroad tracks that lead right up to the front door are still visible.  Taylor-Wharton produced the steel for the building’s structure. 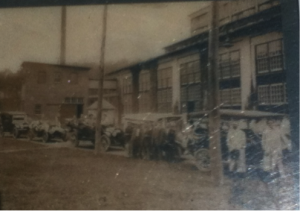 The other is a stone building, first build around 1725, which had held the administrative offices.  The office building was originally two stories tall, as seen in the photo.  A wing was added in the 1890s.  In the 1920s the front porch was removed and replaced with circular steps of stone.  A third story was added at this time.  The stone tablet over the arched doorway reads, “Taylor-Wharton Iron & Steel Co. – Founded 1742.”  When Taylor-Wharton closed in 1972, the office building was abandoned.  Today it is on NJ’s top list of endangered structures, and it is nationally recognized as an historic building.

They sit as historical reminders of an industrial site that provided employment, importance, and pride to the borough for over 250 years. 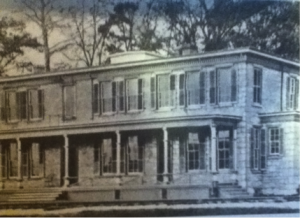 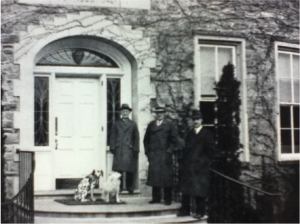 The office building stands proudly and elegantly with its new entrance and third floor. Note the ivy covering the walls.

Union Forge Park: Across the Street: Playground / Soccer Side

Across the street, along the Raritan River where the playground now is, the High Bridge Fire Co. held dances in a pavilion near the river.   On Saturday nights, people would dress up and come out to High Bridge to listen to bands, socialize, and dance.  Hundreds of people attended, as seen in the photo, and the cost was about 10 cents a dance.  The dance pavilion was taken down shortly before World War I.

In what is now the soccer fields, a circus would come to town twice a year to entertain the citizens of High Bridge.  It was a small circus, but very thrilling for the small town attendees, many of whom never traveled far from the borough. Every summer huge crowds would attend the Firemen’s annual Carnival on this site. 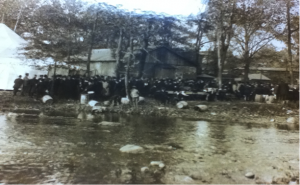 Enjoying the bands at the dance pavilion. Note the crowd of people it attracted.

Many thanks to Mike Hann, Terry Sheets, and the Pictorial History of High Bridge, N.J. book for information on putting together this article. 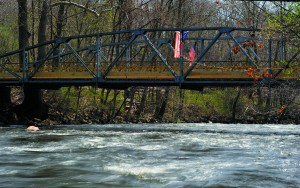 The Taylor SteelWorkers Historic Greenway is a 6.5 mile trail that winds its way through High Bridge. Follow the Columbia Trail for approximately one-quarter mile from the Commons and look on the right for the trailhead gate. The Trail proceeds to the historic TISCO Complex and then crosses a 100-year old trussbridge, which was refurbished by the Union Forge Heritage Association in 2011.

After crossing the bridge, the Trail proceeds north along the South Branch of the Raritan River towards Lake Solitude and Lake Solitude Dam, Solitude House and the Union Iron Works ruins.  From there the Trail continues on to the entrance of the Nassau Trail, works its way to Springside Farm, and proceeds from there to the Amesbury Furnace in Clinton Township.

The History of The Commons on the Wye Park

The Commons Park, located on Main Street in High Bridge, NJ, is complete with a gazebo, outdoor stage for summer concerts and movies, and ample parking, creating an attractive trail head for the Columbia Trail.

The History of The Commons on the Wye Park

The “Wye,” as The Commons was originally called, is located on upper Main Street across the street from the starting point for the Columbia Trail. Parking is available at The Commons, which is within walking distance of the Borough’s Main Street shops and restaurants. The Commons grounds covers approximately seven acres; the open park area is only part of the entire parcel. The western end of the Wye angles all the way back to the former well house at the end of Woodland Terrace. 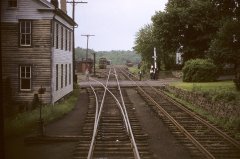 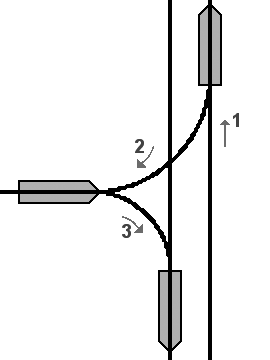